Miles M-14A Magister serial number 873 was released by the mother factory of Miles Aircraft Ltd in Reading in 1938 to embark her duty with 15. Elementary & Reserve Flying Training School in Kidlington as RAF Code No. N3827. It was formed on June 24th 1938 and operated by Marshalls Ltd. The School was disbanded on September 2nd  1939. One day later the 5. Elementary Flying Training School was established in Hanworth and N3827 was assigned here. On June 17th 1941 the School moved to Meir Airfield and existed until December 23rd 1941. 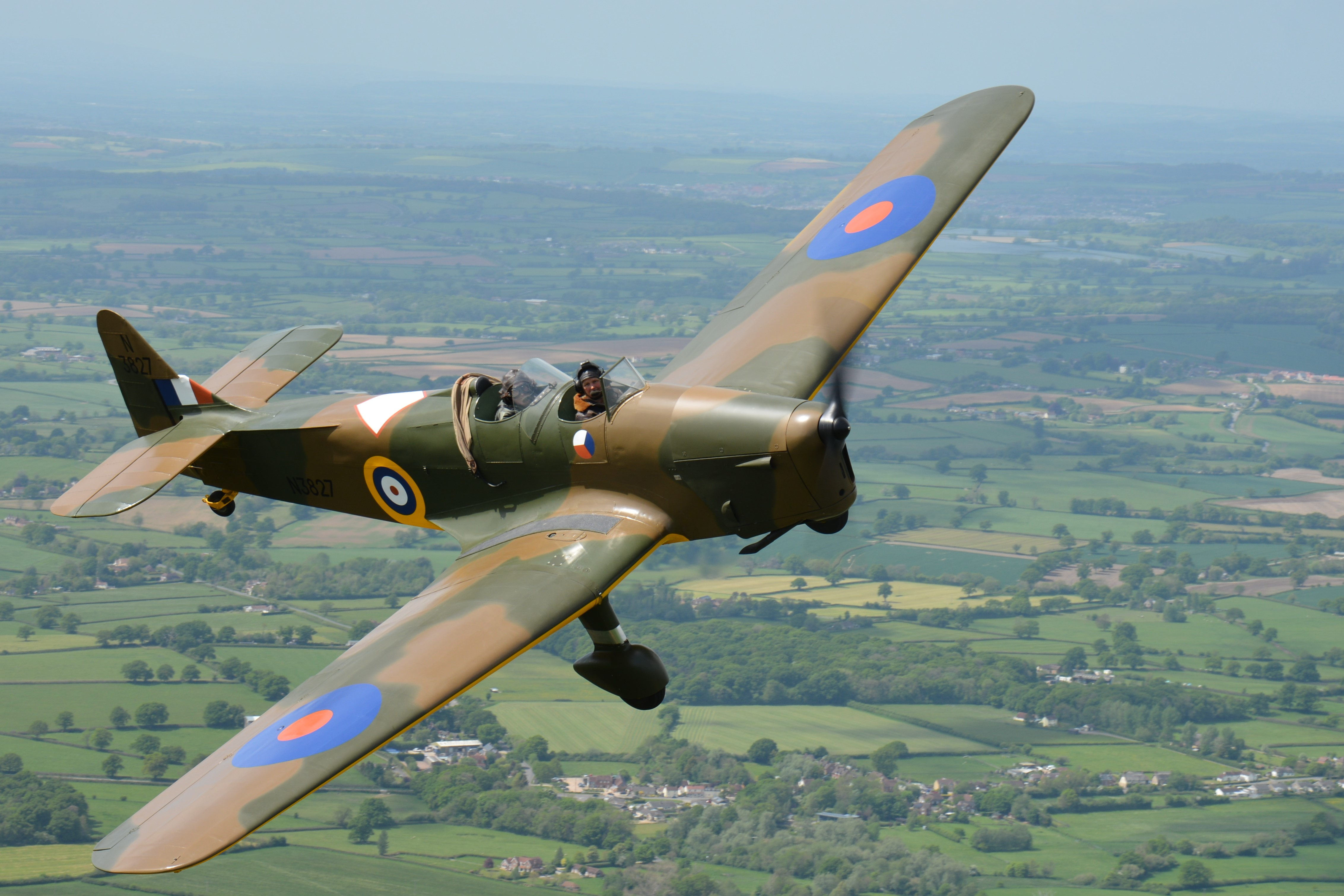 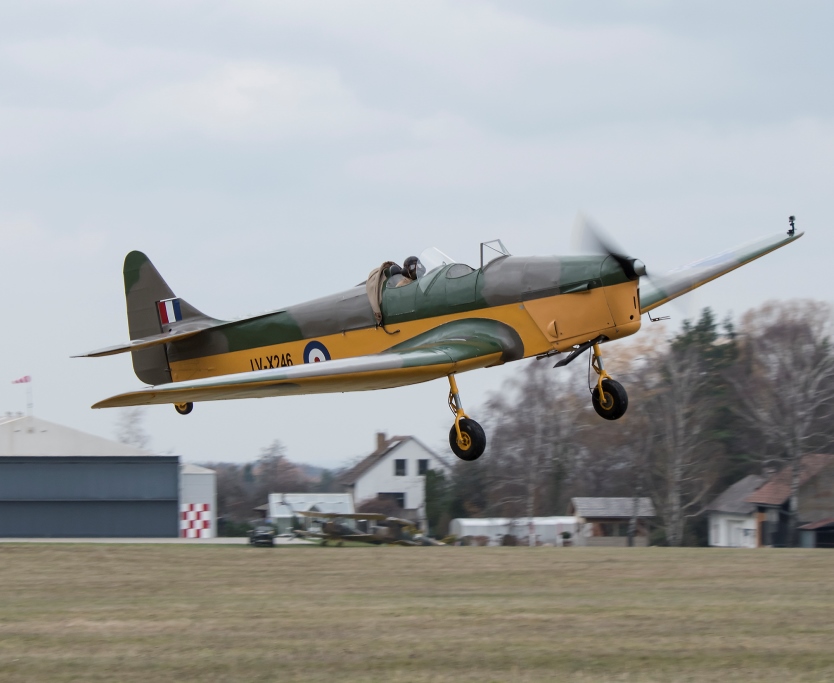 N3827 pictured at Podhorany Airfield (LKPN) on November 22, 2019 yet bearing the Argetinian regsitration LV-X246 (photo: Petr Kolmann). Below a footage by the Czech TV from a local news released later in the afternoon that day

The airplane was assigned to No.2 Flying Instructors School, Montrose- Scotland in the beginning of 1942. It was to train flight instructors for elementary and advanced Schools single and multiengine. For this purpose Avro Tutors were used here by the time this Magister was delivered but since 1940 Magisters were prevailing already – a total of 45 aircraft on the spreadsheet. The second part of the training was performed on Airspeed Oxfords Mk.I.

Numerous Czechoslovak pilots were passing their tutorials here since 1940. The most remarkable moment is No.10 FI Course, held by 2nd FIS form July 1st to August 21, 1942 featuring also two Czechoslovaks F/O Jan Mokrejš a F/Sgt. Jaroslav Šika. Both passed a two-phase syllabus on Magisters and Oxfords whereas Mokrejš carried a total of six flights on N3827 logging 7.10 hrs on the aircraft. Šika has no entries related to the aircraft in his log book. However most likely Mokrejš was not alone to fly this machine for more Czechoslovak pilot could be named who were passing the 2nd FIS. i.e. F/O Benedikt Blatný DFM, who embarked No.24A FI Course on May 27, 1942. 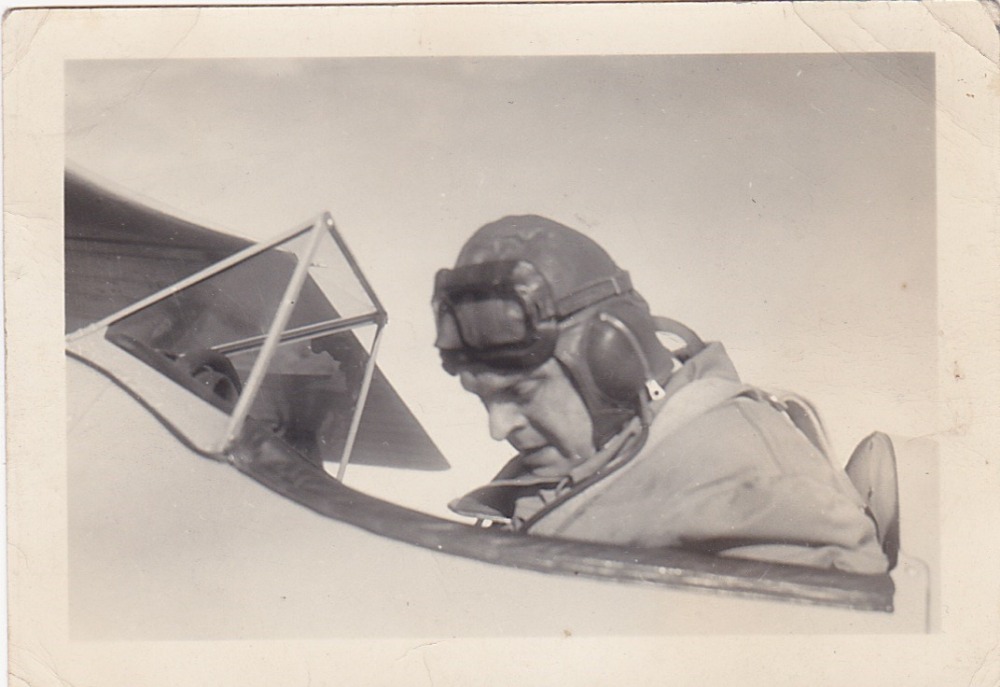 Above: Jan Mokrejš strapping in a Boeing Stearman during his wartime instruction sorties (undated).

Below: Pilots František Peřina and Ladislav Světlík (front seat) in the Magister R1918 allocated to 312th Czechoslovak Fighter Squadron. Backside of the photograph reads "Scotland 1942, our transport magister" -handwritten by L. Světlík. (published with kind permission of R. Tureček who acquired the photo from L. Světlík in New Zealand). 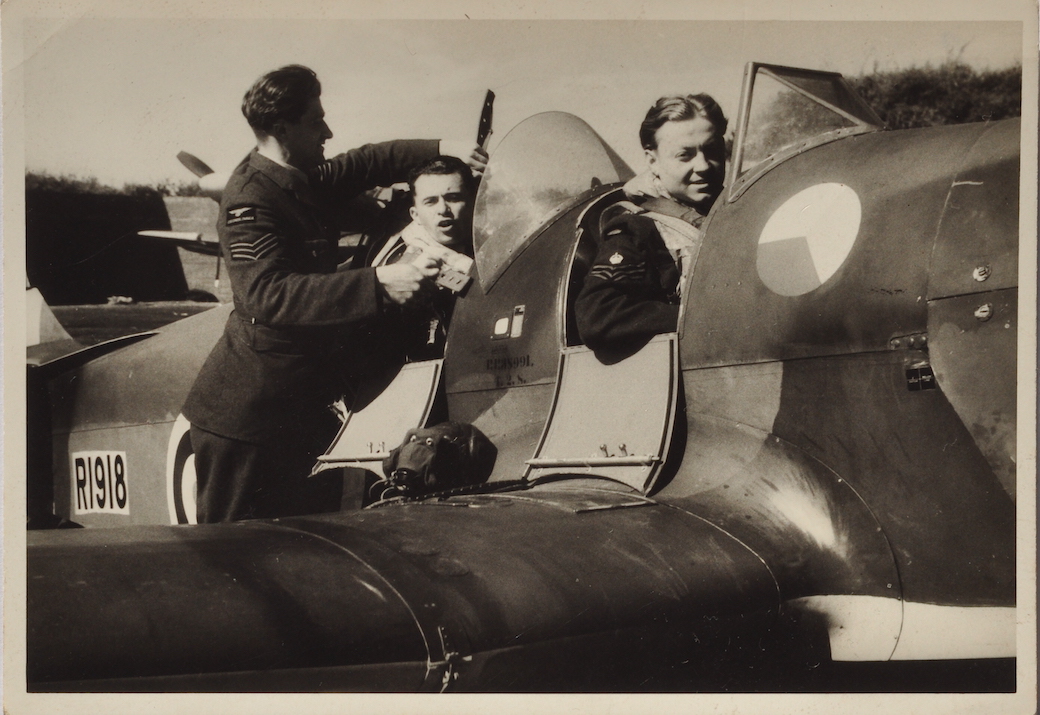 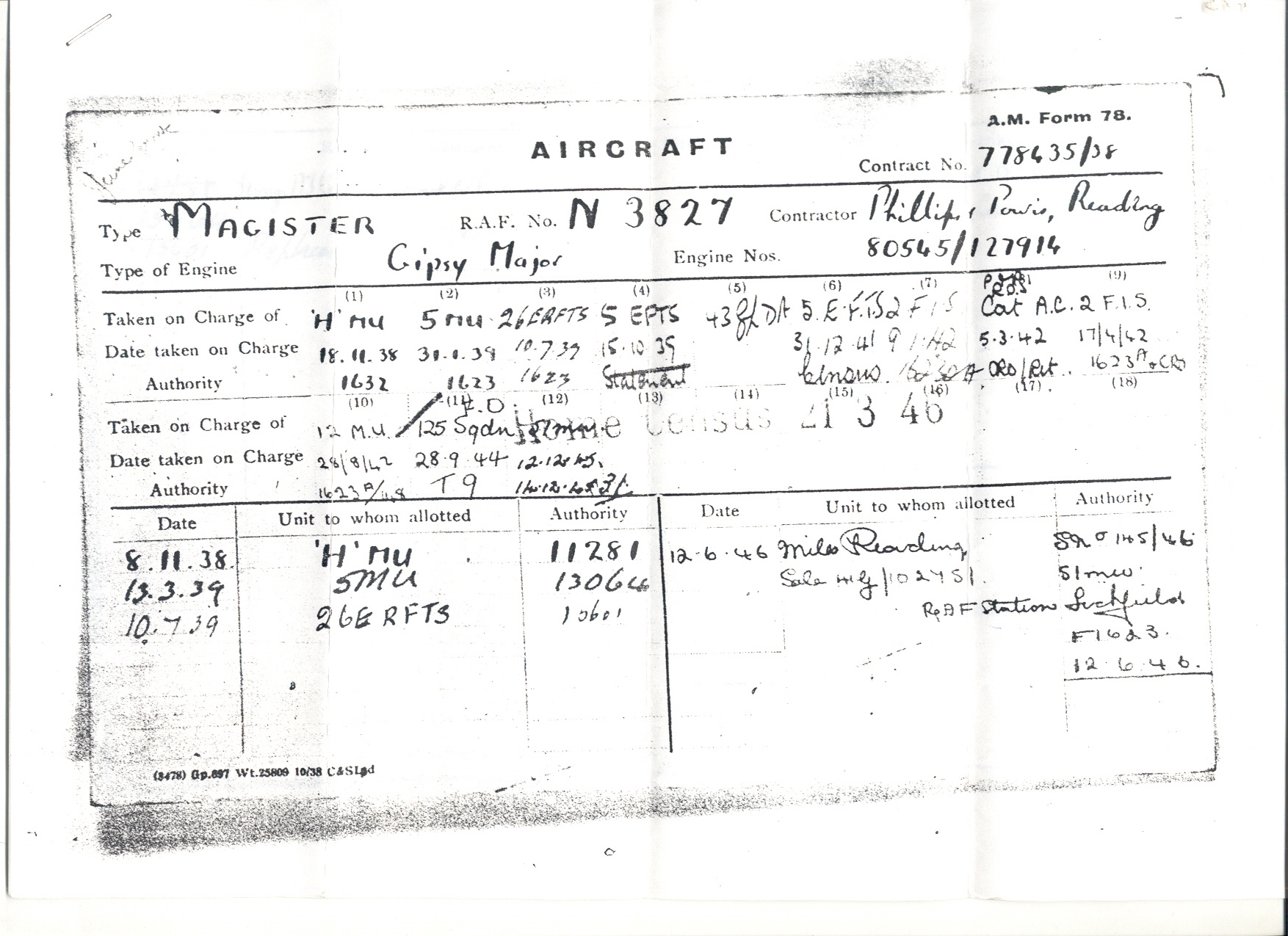 The aircraft was posted to 12 Maintenance Unit, Kirkbride on 28th August 1942. Ferried Kirkbride-Hawarden by Third Officer Miss June Constance Howden (NZ) ATA on 24th September 1944, then Hawarden-Middle Wallop, 25th September 1944, where it served with wth 125 (Newfoundland) Squadron, Midddle Wallop from 28th September 1944.  125 Squadron helped to defend the London area against the V-1 flying bombs at this time.  The squadron moved to Coltishall on 18th October 1944 and then to Church Fenton on 24th April 1945, where it also appeared in their Battle of Britain Display, on 15th September 1945.  From April until June 1945, F/O Pavel Kudláč, a Czechoslovakian pilot, was flying DH Mosquito NF Mk.30s with 125 Squadron.  It is quite likely that he might have done some flying on the Maggie too while with this unit. 125 Squadron disbanded at Church Fenton on 20th November 1945. 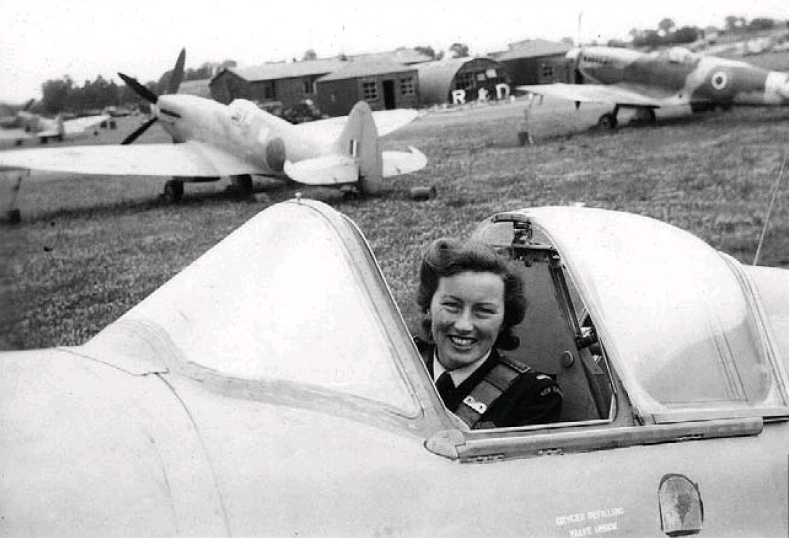 Third Officer Miss June Constance Howden (NZ) of the RAF Air Transport Auxiliary unit seated here in her beloved Spitfire. Mrs Howden later wrote: “I felt I was doing something worthwhile with what skills I had and I did something I could never do in Peacetime. “I once dreamed of Flying around England in a Tiger Moth but never dreamed I’d get to do it in a Spitfire.” 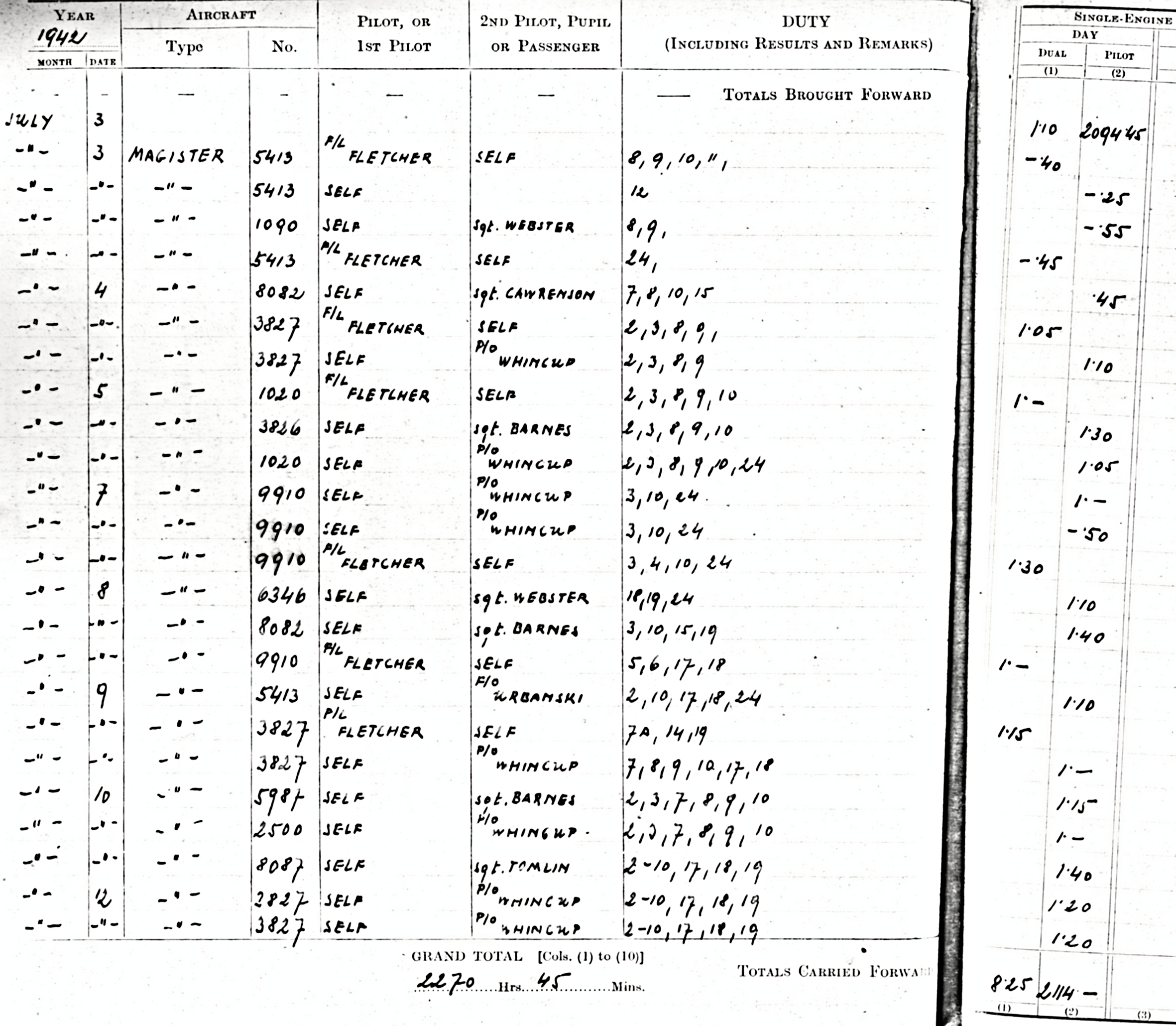 Sold 12th June 1946 to Miles Aircraft Ltd, Woodley.  Refurbished for sale to the Argentine Government as one of the order for 150 Miles M.14A Hawk Trainer Mk.IIIs placed by the Dirección General de Aeronáutica Civil, the civil branch of the Argentinian Air Ministry. Registered to H Hennequin & Cia, Buenos Aires, Argentina, with CofA No.8287 issued 28th August 1946. Registered LV-XSG on 30th June 1947 to the Secretaria Estado Aeronautica, Buenos Aires, for use by Aero Club Villa Maria. 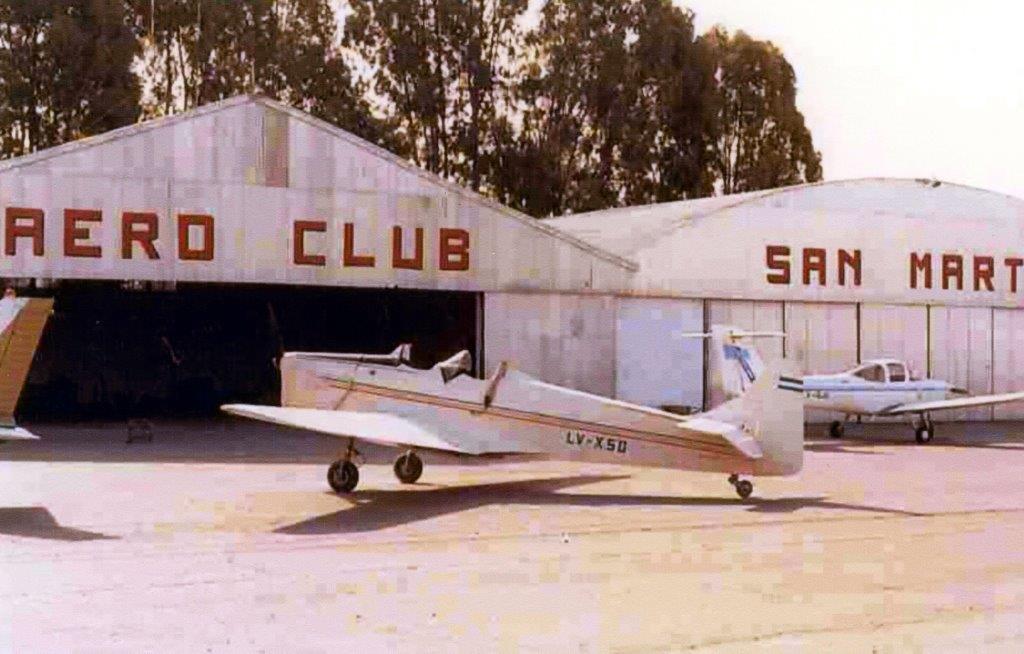 N3827 in the eighties in front of San Martín Aeroclub hangar. Below certificate of registration by ANAC dated August 7, 1962.

N3827’s intense training career in Argentina ended on September 23, 1957 when it was donated to Villa María Aero Club. On November 16, 1961 it was handed over to Aeroclub San Martín near city of Mendoza and re-registered on the new owner August 7, 1962. Her subsequent history is then less clear until September 21, 1986 when it was discovered in the hangar of San Martín Aeroclub- mossy but complete. It must have been stowed well as all other still existing Magisters were burned in the period of 1968-1975. The refurbishment was initiated by the renowned Argentinian restorer Hector Poulain, who’s had the merits for bringing the aircraft back to flying order. In 2005 the Magister was transferred under EXPERIMENTAL airworthiness rules because NORMAL or STANDARD categories no longer allowed aerobatic manoeuvres on vintage aircraft. Registration marks were amended to LV-X246 and N3827 has retained its original aerobatics capability as per Pilot’s Operation Manual. Two years later the aircraft obtained a new wartime camouflage including original RAF code number N3827. The leader of the paint job was Gustavo Marón, an Argentinian Aviation Historian specialized in Miles aircraft, in cooperation with Peter Amos who is the world’s most respected expert in history of the mark. 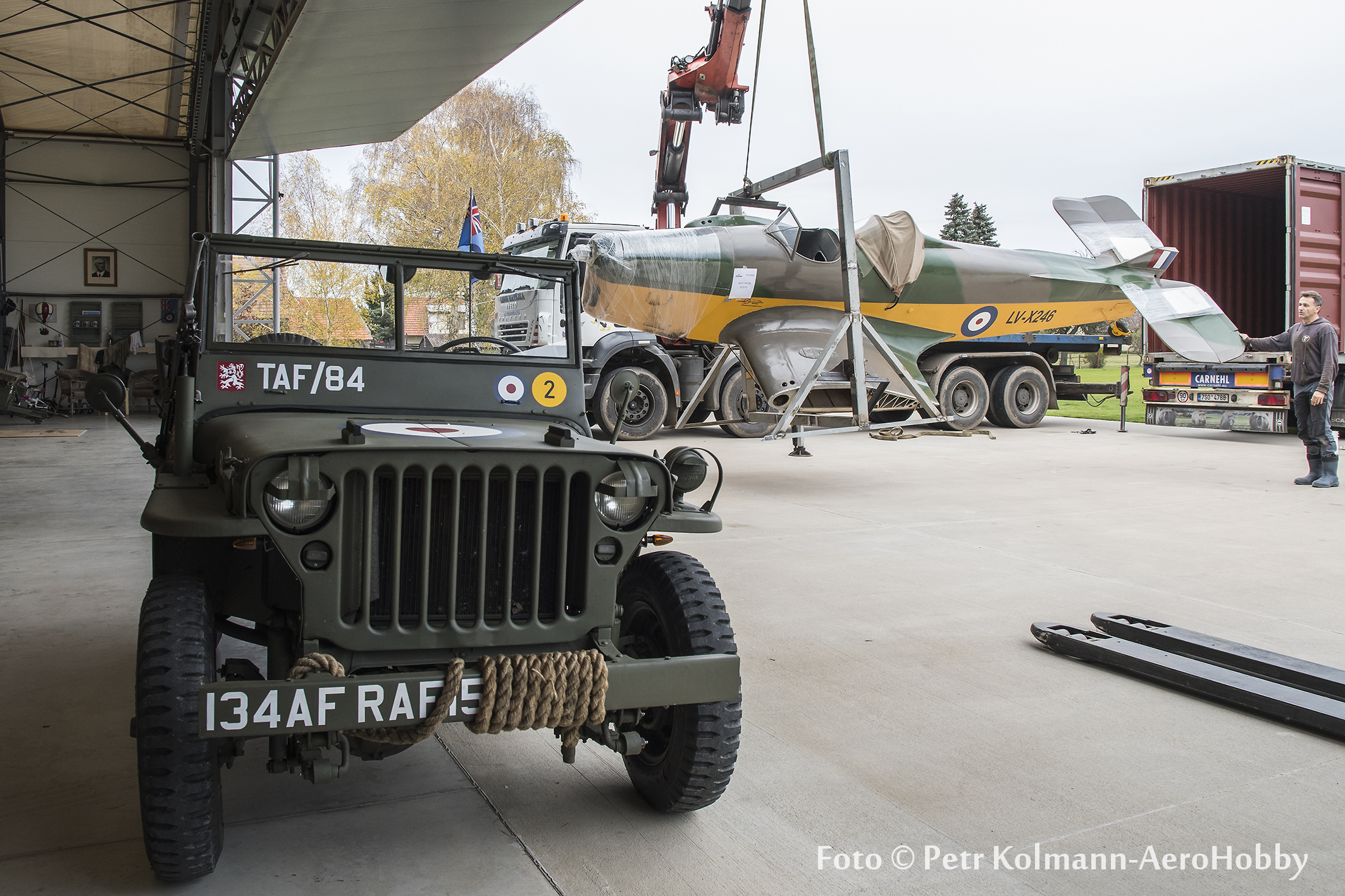 Still fully airworthy the aircraft was acquired by R.A.F. Station Czechoslovakia in July 2019. Delivered to Podhorany Airfield (LKPN) on November 5, 2019 in a 40 feet container the aircraft was assembled and took of again on November 22, 2019. Few days later the aircraft was ferried to Henstridge UK for a ground-up restoration by Kevin Crumplin & Co. Registered in March 2020 by the UK (this time Civil) Aircraft Registry as G-CLHY and obtained a permission to use the original wartime colour scheme and markings by the RAF Events Team. 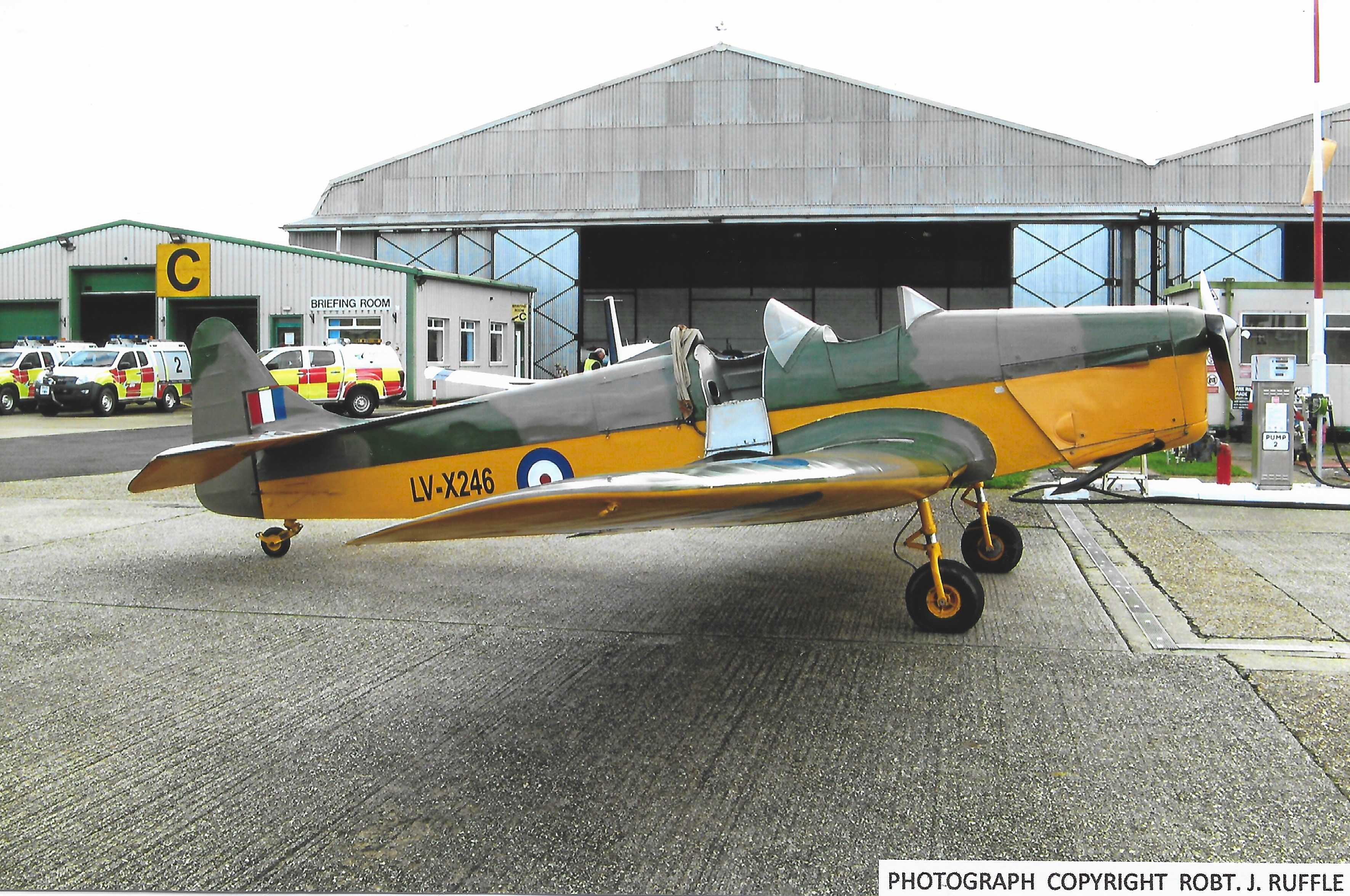 December 7, 2019. The very first appearance of N3827 on the English soil after 73 years spent overseas. Posing here at Shoreham (Brighton) airport after crossing the Channel out of Kortrijk Belgium. Photographed by Robert Ruffle who was the ATC on duty at the time of arrival. Robert was accompanied by Adrian Brook the former owner of Shuttleworth based Magister serial N3788 and Peter Amos the Hon. Gen. Secretary of the Miles Aircraft Collection (for his sins- like he always says).

The new paint matches the colour scheme and markings of a Magister No. T9752. This aircraft originated in the production series of 220 units (s/n T9669 – T9982) released by Miles between May and November 1940. As new it was posted to 37 Manitenance Unit Burtonwood on 14th July 1940. On January 11th, 1941 delivered to the B flight of 312th (Czechoslovak) squadron at Penrhos in the Northern Wales where it has moved from Speke airbase near Liverpool on December 22, 1940. T9752 obtained some more camouflage here covering both sides of the fuselage leaving only peripheral ring of the RAF roundel in the original training yellow thus changing it from type A on A1. The Magister has been used mainly as an air-courier between Penrhos, Speke and Valley to where A flight moved on 3rd March 1941 and later to Jurby, Isle of Man, on 25th April 1941. 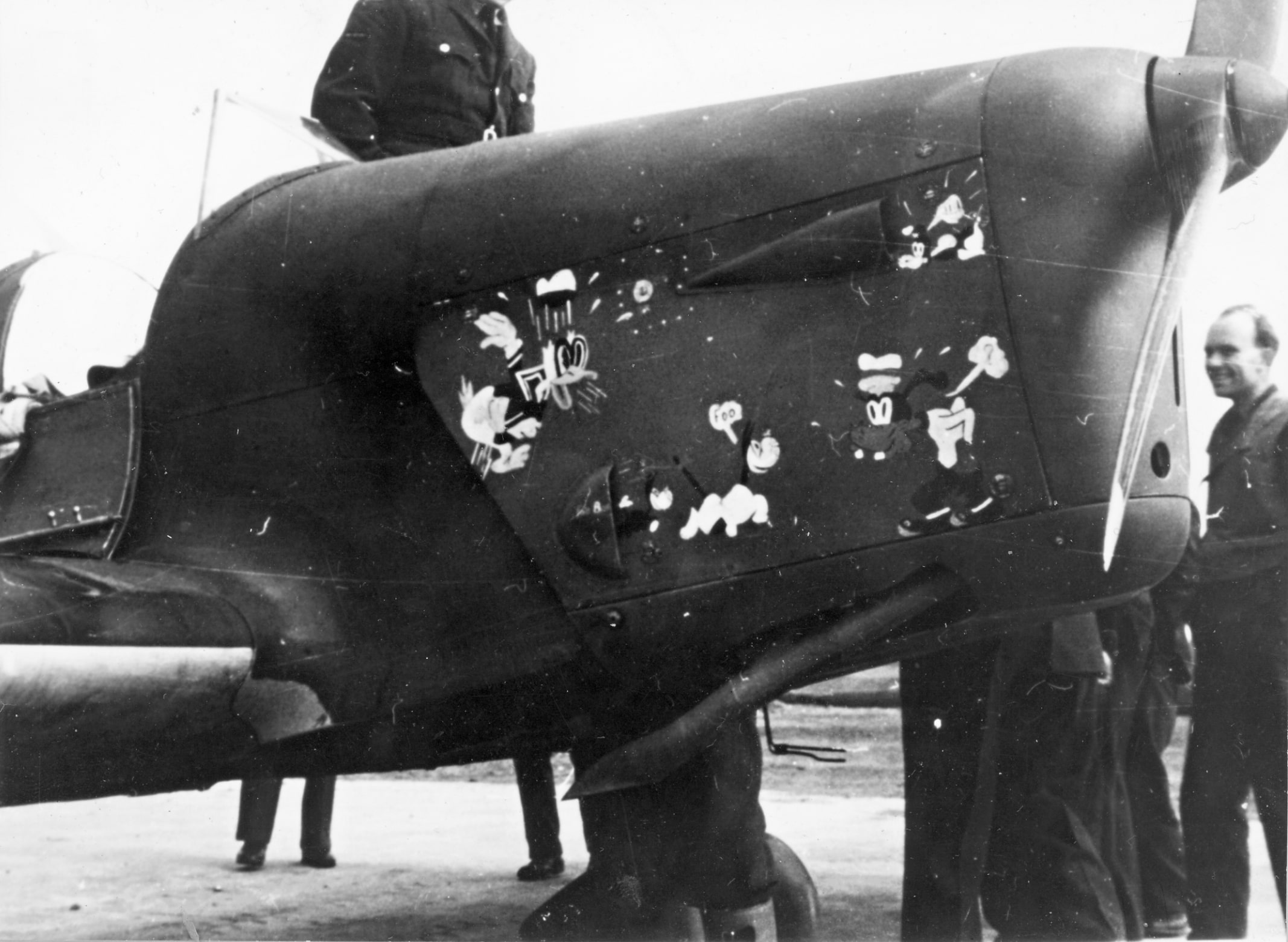 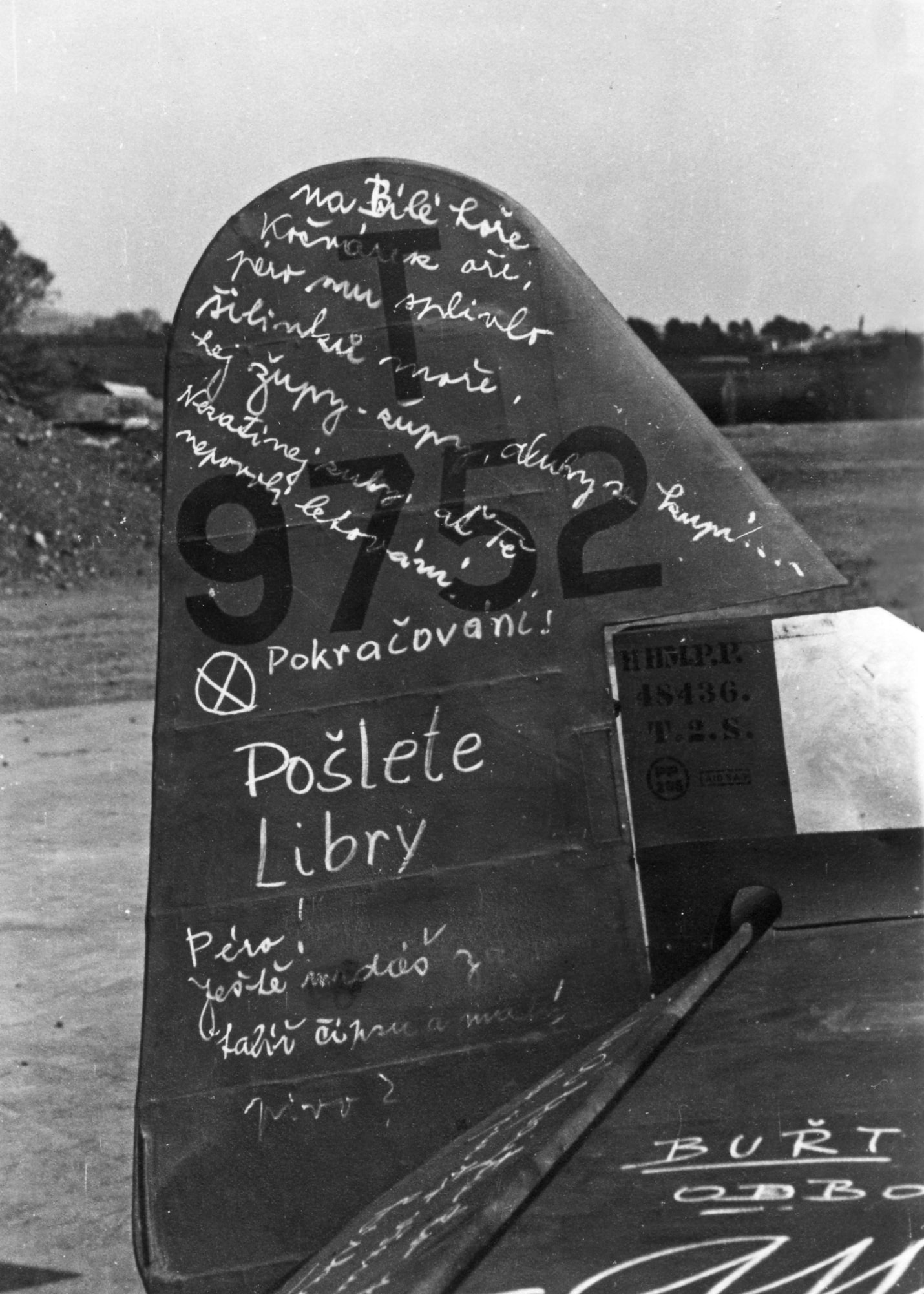 Photos of the Maggie with Disney’s figures exist both „clean“ and featuring chalk writings by ground staff.  Their “graffiti” shrouded the fuselage, the tailplane, both wings (top and bottom) and eventually the propeller. Sadly not all notices have been documented. The date noted on the aircraft (10. IV. 41) reveals when this happened- thus yet in Penrhos. Once united the „threetwelve” has operated in Jurby on the Isle of Man since April 20. On May 29th 1941 its personnel air-moved to the combat base at Kenley and all Hurricanes and the Magister were left in Jurby where they were taken over by the  302nd  (Polish) squadron. While with the 302nd the aircraft fatally crashed during emergency landing on July 8th Hall Caine near Ramsey and was written off. (historic text and photos: Zdeněk Hurt, Gustavo Marón, Peter Amos, Richard Santus) 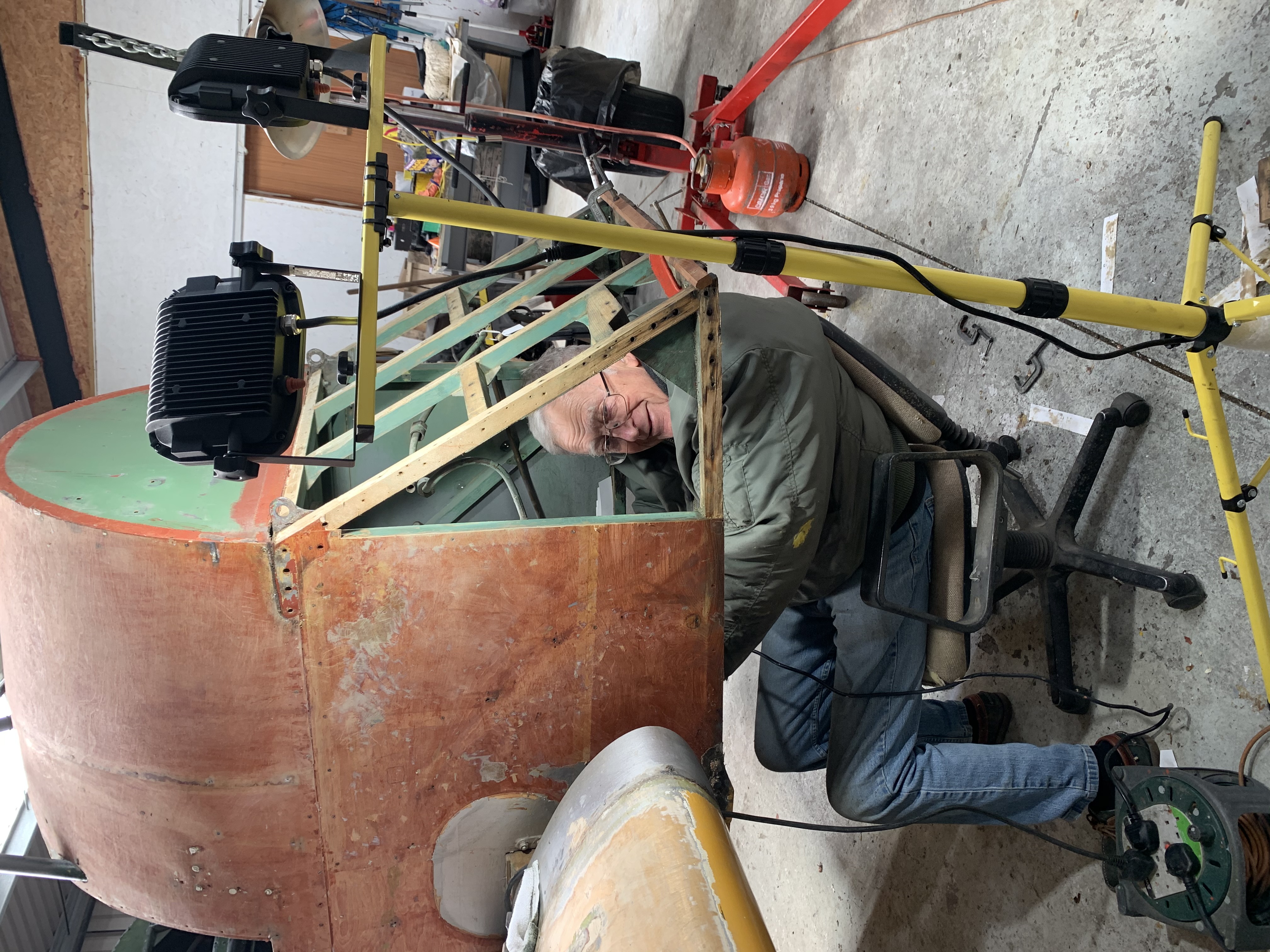 The ground up restoration by Kevin Crumplin and Annabelle Burroughes took place at Henstridge between February 2020 and March 2022. A weight was lifted from our hearts when the original wooden structure and glue joints were found in such a good condition that 95% of the airframe could be preserved making it the most original flyable Magister in the world. The engine was removed and overhauled to zero time by Vintage Engine Technology Ltd. Test flown and certified between Apr 27 and May 13 2022. Before crossing the Channel on the way to the homebase at Podhořany the Magister made a mandatory stop-over at Old Warden (the evening show of May 14, 2022) to meet and chat with all other world's flyable magisters. 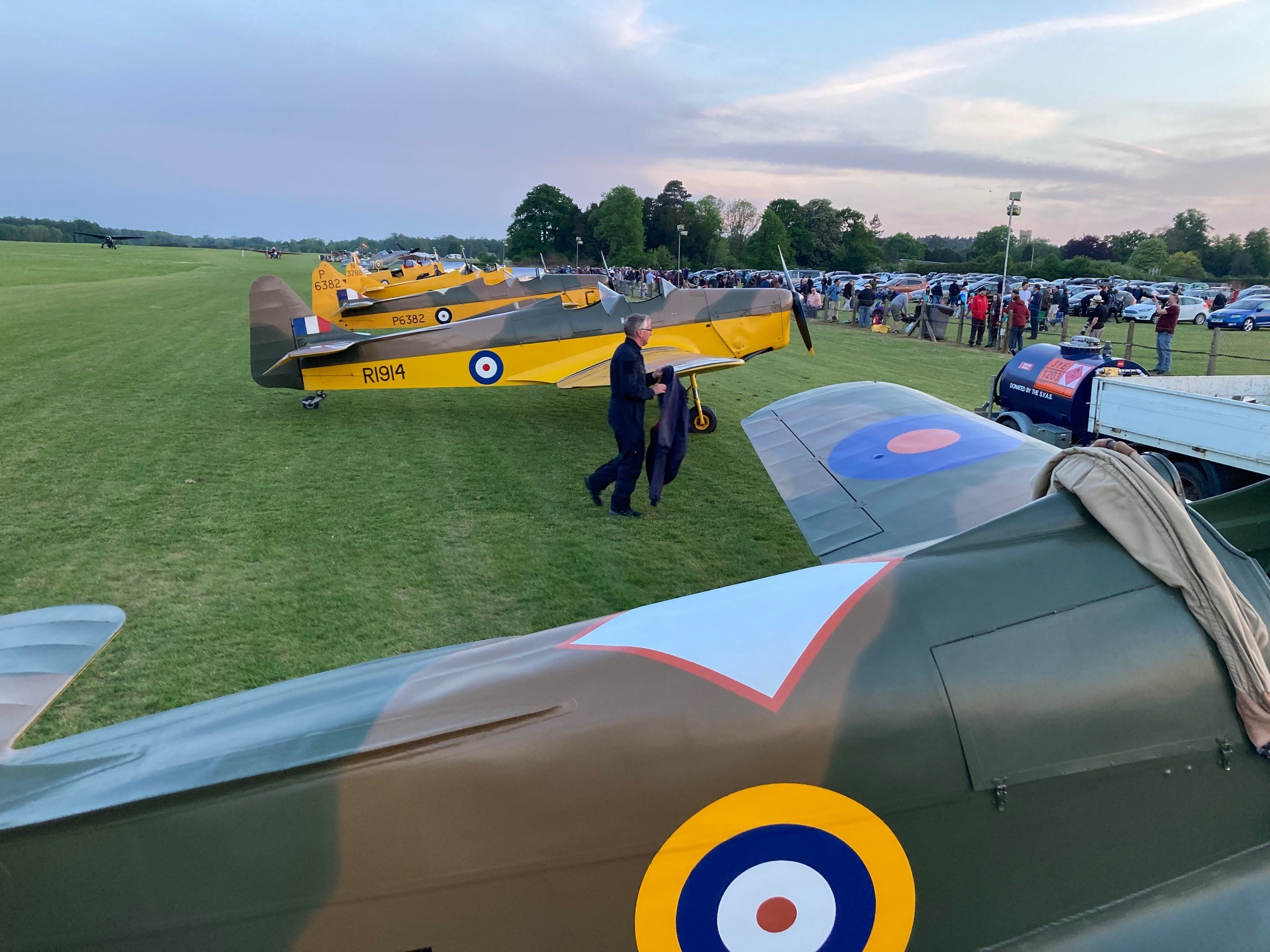 Good Company at Old Warden on May 14, 2022. The world's complete population of airworthy magisters line abreast. Guess which one is the most handsome.